It was a spirit-filled weekend for the missionaries, pastors, and some visitors as they gathered at Madalphy Youth Training Center in Daejeon, South Korea for the annual missionaries’ retreat.

This year’s theme was Growing Like Jesus and is aimed at reviving the message found in Luke 2:52. All programs throughout the weekend were very wonderful and became blessings to everyone present. 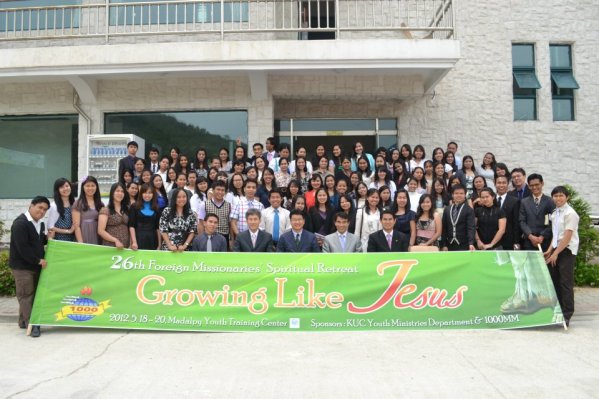 Pastor Oh Beom Seok, WCKC Youth Director, stressed in his message during the vesper service the Goliaths in our lives and how we can triumphantly overcome them like the conqueror David.

Pastor Lee Eun Sup, 1000 MM Associate Director, also inspired the missionaries through his message and uplifting words during the AY program. He re-emphasized the importance of being fervent in working as an army of God in a foreign land.

We bring back all the glory to God for the success of the programs and the blessings brought about by the retreat.

For more photos, please visit the 26th FMSR, under Gallery

: a person undertaking a mission and especially a religious mission A missionary is a propagator of religion, often an evangelist or other representative of a religious community who works among those outside of that community. The English word "missionary" is derived from Latin, the equivalent of the Greek-derived word, "apostle".

Whom shall I send?